Nokia Cooker is a PC software reserved to the Cookers, which allows to modify the files containing the phone's firmware to create customized firmwares versions named Cooked-Firmware. 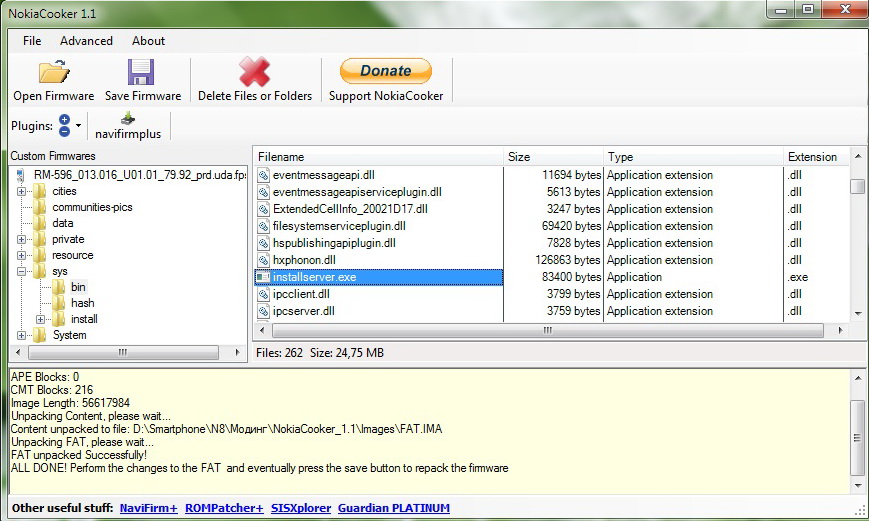 Informations for Developers about Plugins:

When NokiaCooker launches your application it will pass the 4 command-line parameters below:
1) the file currently selected in the window on the right side
2) the path where the fw files have been extracted (eg: c:\nokiacooker\files\n8fw_extracted\)
3) firmware filename (eg: RM-596_011.012_U01.01_79.92_prd.uda.fpsx)
4) firmware type (UDA, ROFS, CORE, UNKNOWN)

How to read the arguments depends on the programming language you're using:
- for Delphi you should use ParamStr() ParamCount()
- for C# you can find the source code of a skeleton Plugin inside \NokiaCooker\TestPlugins\

0.7
- New: Support for 3rd party Applications/Plugins. You can Drag & Drop any executables to the Plugin's toolbar to add them to NokiaCoooker
- Fixed: for some UDA, the bkupBootRecord wasn't handled properly showing the message 'Root Cluster is NOT Supported!'

0.6
- New: Added a smart CRC-Fixer: There will be no more CRC warnings in Phoenix!
- Improved: Replaced checkbox with button for ROFS resize
- Improved: Sligtly GUI improvements
- Improved: Better performances when showing folders with a lot of files

0.4.2
- Fixed: Some ROFS file were skipped during the Rebuild if the file was in a very long path like:
"C:\Documents and Settings\Root\Desktop\NokiaCooker BETA 0.4.1\Files\private\10203636\security\trustroots\device\certificates\TMO_trusted_third_party_certificate.cer"

0.4
- New: FAT32 file-system is now supported. (X6 UDA is in FAT32 format)
- New: Extension Column in the grid. So you can easily remove unneeded languages files from the ROFS
- New: Experimental ROFx support... It should work but NEEDS TO BE TESTED!
- New: Automatically creates a Backup File when repacking firmware.
- Improved: FAT Detection
- Fixed: ROFS Rebuild for N97


PLEASE NOTE: this tool is very easy to use, but it is always a tool for experts and smart people, it is not for everyone!
If you remove or replace some critical system component, your phone will dead at 100%, you have to know exactly which is the purpose of the files that you remove/replace! 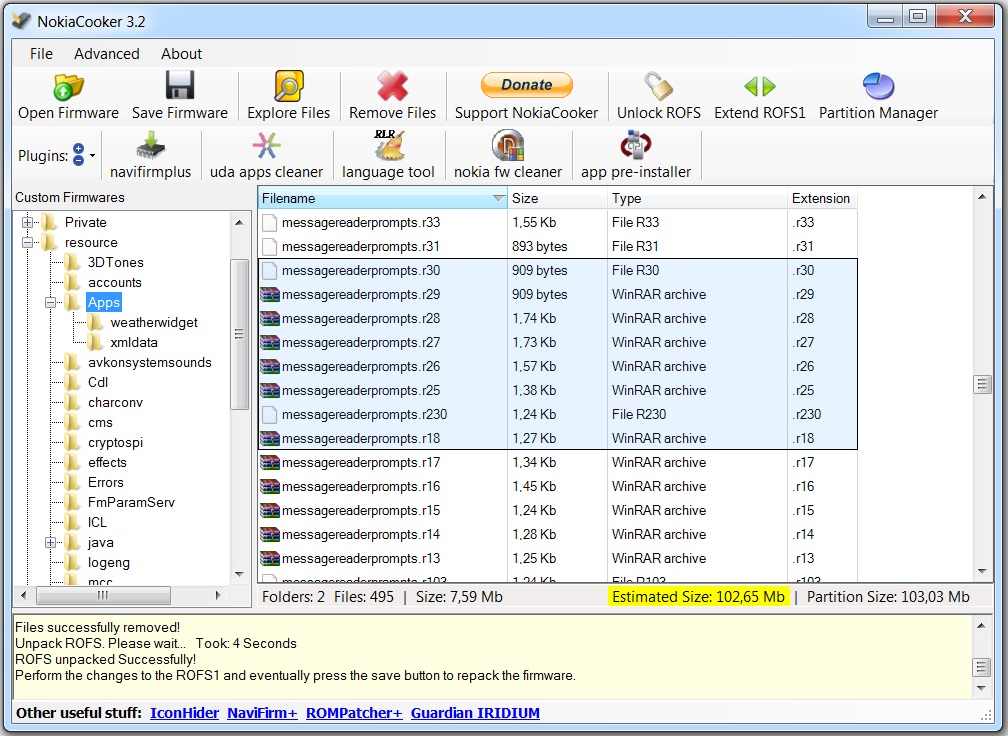 NokiaCooker Change-Log:
2.1:
- New: you can extend the ROFS1 partition to the maximum size.
- New: added Yellow status for the Estimated Size.
.When it is marked in Red, the repack will probably fail and you'll be forced to remove some data.
.When it is marked in Green the repack will probably complete successfully.
.When it is marked in Yellow, the size of the current data is near to the limits of the Partition, so you have to try to repack the fw to know exactly if it will be repacked successfully or not.
.In any case, NokiaCooker will never let you write outside of the Partition Size limits, so it will be always safe to flash the repacked fw.
- Improved: shows a confirm dialog when you attempt to close the fw file and it has not been saved yet.
- Improved: in order to grand a safe repack, 2 different checks are performed when repacking the data to be 100% sure that the new data will not exceed the maximum partition length.
- Improved: toolbars settings (text and icon size) can be customized using the right mouse button.
- Improved: added expand all / collapse all commands in the treeview.
- Improved: avoid TreeView flickering when the directory selected contains a lot of files.
- Improved: computation of the final CRC takes less memory, allowing to process bigger UDA files.
- Improved: better computation of the new blocks needed during repack.
- Improved: ROFS1 partition size detection.
- Fixed: message "NokiaCooker is running as Administrator" was wrongly shown when UAC was disabled.
- Fixed: after removing some data from the ROFS1, the filesize of the repacked fw was still unchanged.
- Fixed: shows an error when trying to repack an unsupported UDA-MMC (BlockType49)
- Fixed: drag&drop was disabled after selecting a recent fw file that didn't exist anymore

2.02:
- Fixed: for some fw, the rebuild corrupts the header informations

2.01
- Fixed: forgot to remove some debugging code that raises some errors when rebuilding images.

NokiaCooker v2.6 Change-Log:
- Fixed: Extend ROFS1 feature was broken due to the 2.5 changes related to the Unlock ROFS.

It will be shown after the fw has been repacked.

NokiaCooker v2.3 Change-Log:
- Fixed: a quick, but important, bug-fix. In the previous version, the changes to the ROFS1 (CORE) were not applied.

- Fixed: then error message "key not present in the dictionary" was shown in some circumstances during repack.
- Improved: NaviFirm+ plugin has been updated to the latest version 1.7
[You must be registered and logged in to see this link.]

Нова версия 2.8 Промени:
- Поправено: изтрито е съобщението "This version is too much old".
[You must be registered and logged in to see this link.] 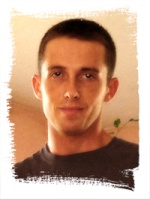 Нова версия 2.9:
NokiaCooker v2.9 Change-Log:
- Fixed: error message "can not read from the end of the stream" when repacking some UDA files (eg. X7)

3.1:
- New: added a new message to the Cookers.
- Improved: the "Expand All / Collapse All" options, will expand and collapse only the currently selected folder.
- Fixed: when sorting list, sometimes empty lines were shown, instead of the files entries.
- Fixed: error message "can not read from the end of the stream" when opening some UDA files (eg. X7)

3.0:
- Fixed: when trying to extend the ROFS1 an ArgumentOutOfRangeException was raised for some fw files (eg. N95)

1. Firstly copy all your original firmware files to a separate folder .

4. After this the partition manager will display the unused memory presnt in each firmware files i.e core , rofs2 , rofs3 , uda !

5. Now to extend the uda size ( increasing the uda size is nothing but increasing size of C drive ) by reducing memories from core , rofs2 , rofs3 and adding that memory to UDA !

Let me explain with an example here ,

Now this total of 45 Mb of unused memory must be shifted to UDA in order to increase the c drive ! so in theory the c drive size increase by 45 MB !

The memory adjusting part is now veryy easy with nokia cooker v3.2 , you just have to adjust corresponding memories of the firmware files with the help of button beside each of firmware files !

NOTE : Dont reduce the memory of the firmware files below the minimum memory allocated and make sure whatever the memory adjustments you make , you do not leave any "exeed space" it has to be balanced !

7. Flash using the all files from the moded firmware folder (you can make further adding of content to these moded files ) , dont forget to caliberate the core !!

8. DO NOT INTERCHANGE THE FIRMWARE FILES WITH CFWs' FILES !

THE PROCEDURE IS SUCCESSFULLY TESTED AND WORKING ON FOLLOWING DEVICES :

Код:
3.3
- New: can be associated to .vpl and .fpsx extensions. Just double-click on a fw file, NokiaCooker will be launched and unpack the selected fw file
- Improved: general exception handling. Some exceptions were not caught correctly, causing NokiaCooker to unexpectedly close without showing any error message.
- Improved: minor improvements

3.2
- New: Partition Manager. It is now possible to repartition the fw and choose the size of ROFS1, ROFS2, ROFS3, UDA. You can even transfer the free ROFS space to the UDA, in order to increase the total available space on c:\
You should not use the Partition Manager on cfw which have been already repartitioned in other ways.
- Improved: the copy option in the log window, copies only the selected text
- Improved: new block (3A) gets parsed for CORE files
- Improved: new header fields (E5, EA) gets parsed for CORE files
- Improved: better Fat detection for UDA files
- Improved: rewritten parsing of .vpl files
- Fixed: when connected to the pc, the Phone Memory was shown as "NOKIACOO~0" or "NCxx"
- Fixed: a wrong clusters computation, could cause a data loss for the 2 last clusters in the UDA, when filled at the top.